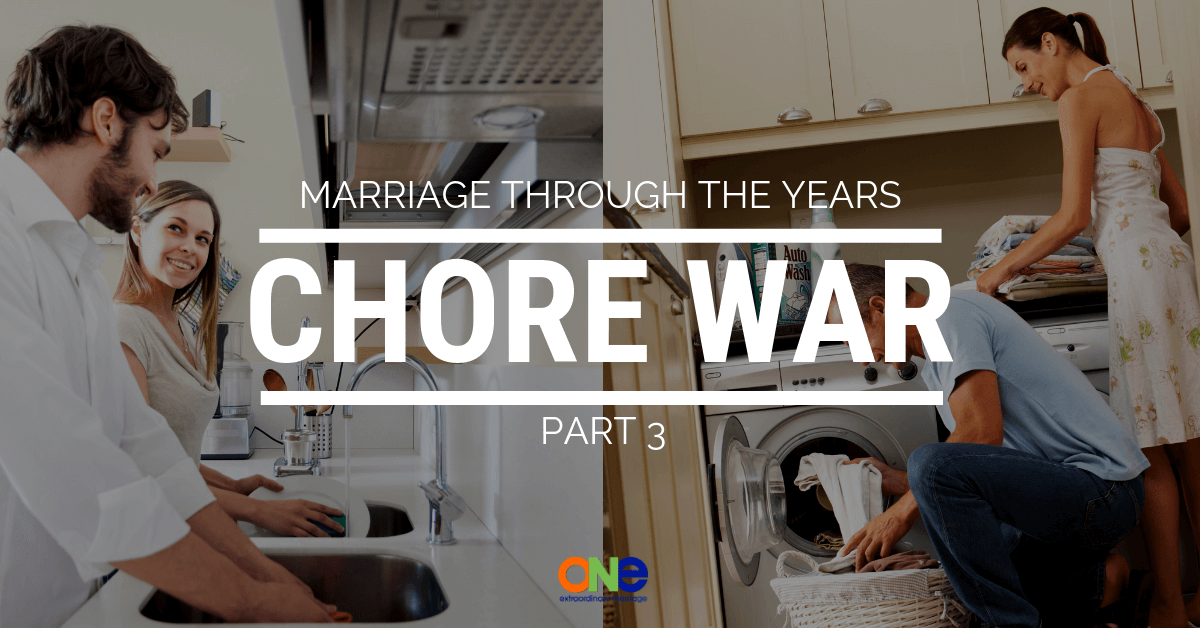 As your marriage evolves and grows, you’ll feel not only shifts in intimacy but also shifts in the roles and responsibilities that you have in your marriage. When navigating how your marriage changes during these seasons, you’ll quickly realize that where you were five years ago is more than likely not where you are now.

During these seasons, sometimes it’s the simple things that can become significant obstacles.

Chores are one of those things. It’s common for couples to struggle with who should be responsible for what in the household. Keeping up a house and taking care of your family and your home is a lot of work.

It can be a struggle to figure out how to get things done and precisely who should be responsible for that pile of laundry that’s been on the floor for two weeks.

When you’re both busy and exhausted, it’s easy to start keeping a scorecard of not only what’s not getting done but the reasons why it’s not your responsibility. Often, you may find yourself frustrated and thinking “doesn’t” my spouse see the same pile of dirty dishes that I do? And if so, why isn’t he or she washing it?

This is the ultimate chore war!

If you’ve ever felt like that, then know you are not alone.

Without realizing it, you may think that there are roles that you are supposed to play in your marriage. You may have entered into your marriage, thinking that the wife would be the one doing all the laundry and changing all the diapers while the husband would be responsible for keeping up the yard.

These assumptions are often created because you never saw anyone else doing those things growing up. You may have seen each of your parents playing specific roles and then assumed that’s the way your marriage would be too.

Your marriage, however, is different from what your parents were.

You need to discuss the things that you like to do and don’t want to do so that you both understand your dynamic. If you both hate doing dishes, then that could explain why there is always a massive pile of them in the sink.

It’s so valuable to sit down and discuss what needs to get done as well as what it’s going to take to get it done. You may realize that you both dislike grocery shopping and might need to have groceries delivered instead. You could decide that since one of you likes to do the vacuuming that that’s the person that should be doing it. Maybe the kids in your house can have more responsibility.

For many of us, getting chores done is more of a communication and expectations conversation rather than an issue of who’s supposed to be doing them.

Instead of keeping score, take action. Make a plan. Have a discussion and problem solve the obstacles that are holding you back from getting things done.

You’re in this together. In love and marriage, teamwork is always front and center. You’re sharing a space, your both dirtying the dishes and sometimes, you need to pick up that pile of laundry and wash it, instead of waiting for someone else to do it.

517: Marriage Through The Years Part 6 — Getting Older