“Celebrations of your accomplishments raise your awareness of what you’ve done.” —Palma Poscillico

The ONE Extraordinary Marriage Show is 10 years old!

You know how significant it is when your kid turns “double digits”? This feels just like that, now that this “baby” is in the double digits.

If you had told us as we sat in our cold garage in January 2010 that we would be recording 10 years later, we would have laughed. Alisa thought we would only do 5-10 shows and here we are at Episode 552.

We often used to say, “Who’s going to listen to us? We’re just an ordinary couple with an ordinary marriage, who did something really crazy (60 Days of Sex) and started talking about it.”

Turns out that there are a lot of you who have given us the honor and privilege of being in your ears once, and now twice a week. From the humble beginnings of our first emails from Colorado and Alaska to now having listeners around the world we are so blessed by the ONE Family.

When we started the ONE Extraordinary Marriage Show, our goal was to impact one marriage. Since we didn’t know whose marriage that might be, we’ve gotten behind the microphones every week since then to encourage you and to share strategies on how to create your own extraordinary marriage.

And what a journey it has been!

Looking back on the show titles is like looking at a yearbook. We’ve shared the good times and the bad times. We’ve cried and we’ve laughed. We’ve gotten feisty (OK, maybe that’s just Alisa) and sometimes we’ve put our foot in our mouths. But in all that time we’ve never lost sight that you are on the other side of the conversation.

You are so important to us.

You’ve been on this journey with us. Not just as a listener but as a participant. Your Hugs are proof that there is an army of folks who are creating extraordinary marriages.

There is a movement afoot of couples who are determined to do marriage well.  Not just for themselves but for the generations to come. Parents are sharing the show with their adult children. Kids are commenting to their parents that “something is different with you guys.” And at the end of the day there are many, many marriages that have been changed in the last 10 years.

This anniversary episode is all about answering your questions about us, our story and things that might have happened before ONE. There are a few questions that have never been brought up on any episode over the past 10 year. There is even some talk about what’s to come in the next 10 years.

We are truly honored and blessed to have you part of the ONE Family.

To another 10 years of sex, love and commitment! 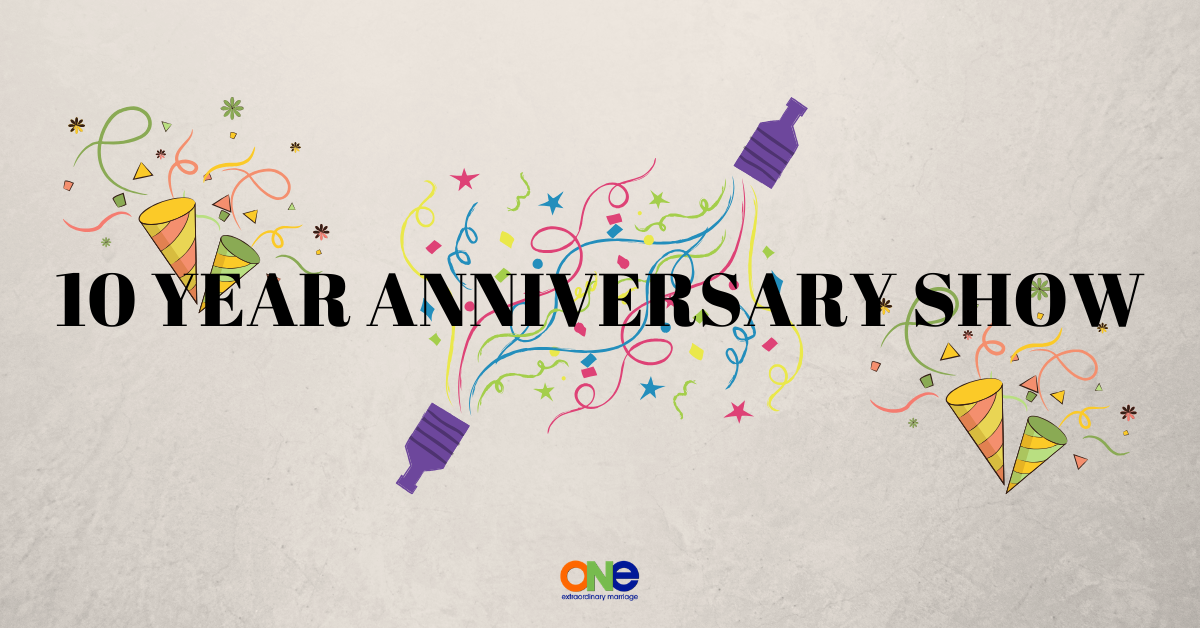 427: Talking to Your Kids About Sex