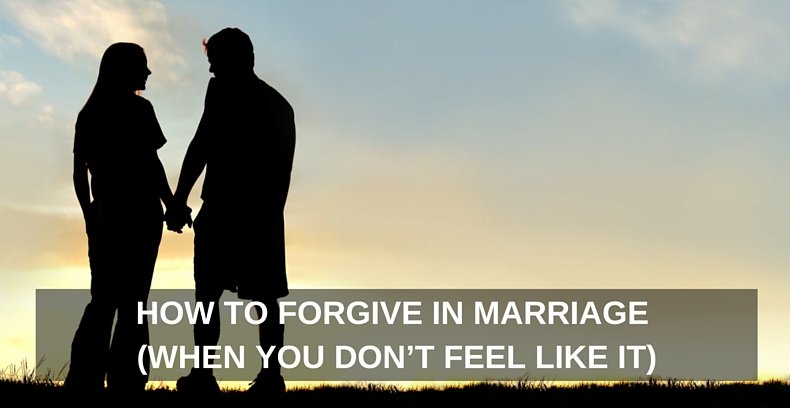 Why is repeated forgiveness a crucial element in a happy, strong, and intimate marriage?

Because marriage is the union of two imperfect people who can (and do) make mistakes.

When you are in relationship with another human being chances are good that BOTH of you will mess up, be selfish and hurt one another. Sometimes on accident, and sometimes on purpose.

Even though Alisa and I have been married nearly 20 years, and now teach thousands of couples on nearly every continent on the globe how to create their own extraordinary marriage, WE still even fudge this up from time to time.

BUT, here’s a secret weapon in our toolbox that many marriages don’t have:

And we aren’t just talking once. Sometimes we get the “opportunity” to practice forgiveness in a specific area over … and over… and over again… until we get it right.

Here’s a problem that many modern marriages face:

We know we need to master the art of forgiveness with our spouse. But no one ever taught us how in easy, practical ways.

Marriage didn’t come with a manual to answer those very real questions.

The dictionary defines forgiveness as ”ceasing to feel resentment” or to “give up resentment.”

Resentment is rampant in marriages.

It’s the justification that we are entitled to treat our spouses differently because of their choices.

It’s the justification that when we feel wronged, we can hold it over them, we can use this as a “weapon in our marriage.”

Are you aware of how much energy it takes to maintain resentment and how much negativity it deploys in your marriage?

Especially when you are constantly playing the bad things over and over in your head or when you are choosing to focus on the negative instead of looking at the positive. It can wear you out.

Here’s something you may not expect to hear:

Forgiveness is not about your spouse.

It’s not about them asking you to be forgiven (although it is nice when they sincerely do that).

Forgiveness is about a choice that YOU make to let go of that resentment so you can show up in your marriage and focus on the solution over the problem.

You can be upset with your spouse and still forgive them.

You can be hurting and still let go of the negativity.

You can release your marriage from bearing the weight of replaying the problem over and over, and over again.

But, it’s not a one time decision.

It’s not “forgive and forget.”

Forgiveness is a choice that you make over and over again.

Because you feel the pain or the hurt over and over again.

When you first begin extending forgiveness to your spouse you may not be aware of the triggers that cause you to be upset, angry or sad. It’s a learning process for both of you.

Forgiveness is one of the purest forms of love. It takes a strong person to say sorry, and an even stronger one to forgive.

Nowhere is forgiveness more needed than in marriage.

If you are struggling with forgiveness, know that you are not alone.

Are you ready to learn how to forgive, no matter how much hurt and damage has been done?

Are you ready to take courageous, consistent, and smart actions that will rebuild your marriage into what you envisioned it would be the day you said “I DO?

It’s time for you to take one small step toward releasing the hurt and begin to extend forgiveness toward your spouse.